OVER THE YEARS, THE MCLARENS LOGISTICS GROUP HAS INVESTED IN DEVELOPING ITS FACILITIES, MACHINERY, HUMAN RESOURCES AND IT SYSTEMS, EVOLVING INTO A MULTIFACETED SERVICE PROVIDER TO THE SRI LANKAN SHIPPING AND TRANSPORT INDUSTRY

The brand ‘McLarens’ enjoyed a strong reputation in the Sri Lankan shipping industry since the early 1950’s, and with the advent of containerization in Sri Lanka, the McLarens Logistics Group was established in 1979 by our founder Chairman, Hubert A. De Silva, together with our current Chairman, Neil De Silva, to provide inland container depot and container transport service to shipping lines and container leasing companies.

Today, the group has a total of 8 companies which include a strong shipping agency, vessel husbandry, NVOCC and ISO tank agency, freight forwarding, and customs brokerage divisions, to offer our customers a comprehensive service. 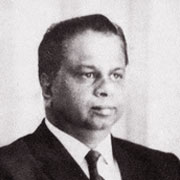 Mr Hubert De Silva began his career in the Sri Lankan government service as a District Revenue Ofﬁcer and later entered the shipping industry by joining the Port of Colombo following its nationalization in 1958. In 1966 he became the Chairman of Port of Colombo. He also served on boards of several other corporations, such as the Port Tally & Protective Services Corporation, Ceylon Shipping Corporation and Ceylon Shipping Lines.

In 1972, he joined the private sector as a Shipping Director of J.D. McLaren & Co. Ltd., which was, at that time, one of the largest foreign owned shipping agency houses. Under the chairmanship of Mr. Hubert A. De Silva, the Company was reconstituted as a fully Sri Lankan owned organization to comply with government regulations and was renamed McLarens Shipping Ltd. The McLarens Logistics Group was established as a result of his diversiﬁcation into container terminal, transport services and warehousing, together with his eldest son, Neil De Silva.